Sometimes, the best writing starts with just a little inspiration.

“Books, in and of themselves, are magical doorways. Opening a book is as simple as opening a door in the real world, but often much more rewarding! Doorways within books are something special. A character who passes through a magical doorway into a world of adventure mirrors the adventure of the reader themselves. They charm and intrigue us as readers. They tempt us into imagining that it’s possible to open an ordinary door one day and find ourselves in a real-life adventure.”

I was considering using doors and portals as a story writing theme for my class and began thinking about potential stimulus to engage children and generate creative ideas for writing. Whilst I have previously used ‘fairy doors’ on trees with younger years, I wanted something else for UKS2. Something that would spark their imaginations with limitless possibilities…

I began by looking for visual stimulus online and came across a wide range of excellent visuals, particularly on Pobble 365 (try Doors, The Tree Door, Opening Doors, The Mysterious Door and The Tomb for starters!). I also found an excellent website called The Secret Door, whereby children can click on the door to reveal different settings and unusual places. For children struggling to come up with an idea for a fantasy world, they could use this to stimulate ideas further.

I also dug out a very large set of decorative keys that I picked up at a vintage market a while back and this sparked another idea. I started Googling sets of vintage keys and – low and behold – eBay appeared to be a goldmine for this sort of thing! Five minutes later, I had bagged myself a mixed pack of 40 vintage, rustic keys for under a fiver. 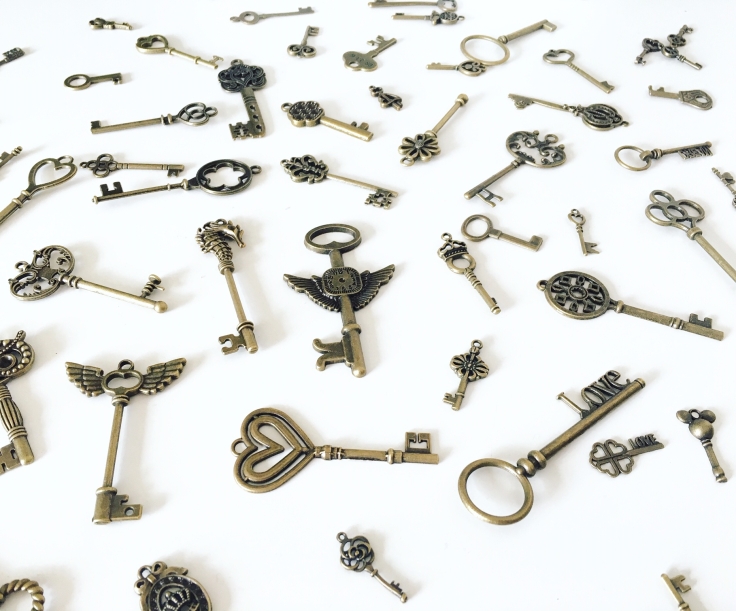 Whatever the purpose, these vintage keys, partnered with a collection of visual stimulus, are guaranteed to help children generate ideas and write their own fantasy fiction. Of course, the prompts could also be used to lead to any genre of writing – for example, creating poetry or a mystery story about finding the key, or a diary entry or letter for instance. This is precisely why I liked the keys as prompts – they present endless possibilities for writing.

Our Purpose and Audience: To write a fictional story for KS2 pupils to read and enjoy.

For the end goal of publishing to a wider audience, I had in mind something along the lines of this display idea from Clare Bradley, except the children could design their own doors linked to their stories. Alternatively, it could be published as a ‘flaps’ book with a different door to open on each page with each child’s story inside (which could be kept in the class book corner or school library for instance). Just a few ideas.

The idea was simply to present the keys to the class and ask, “Where would these keys take you?” then allow some time for them to explore the various keys on their tables. Teachers could even model this talk for writing first, for example:

“This key would take me deep under the sea, it’s the key to a palace of Mermaids.”

“This is the key to the door in the cloud where Angels keep the time that is allocated to each human lifetime.“ 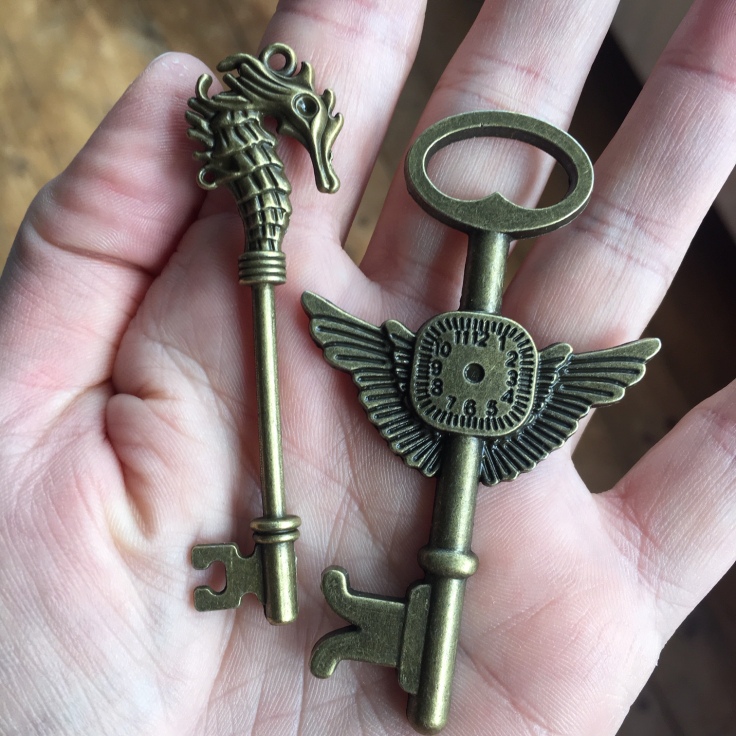 You could then present the children with the various images of doors and ask: “What would be behind these doors?”

Any voiced thoughts, ideas or anecdotes that arise from the objects are definitely the sort of thing that is worth writing down.

“Mindmaps can be used to generate ideas and to help children organise their thinking. When someone has lots of ideas buzzing around their head, it often helps if they get them down on paper in a clear and memorable form. That way, they can start to see patterns and links, which in turn generates more ideas.”

Before you ask the children to mind map their initial ideas, perhaps do a whole-class example and model this on the flipchart/whiteboard to show them how it’s done. For example, in this exercise, it could be a simple ‘Story ideas’ mind map. From there, they can draw lines out to the main ideas such as possible settings, characters, dilemmas etc. 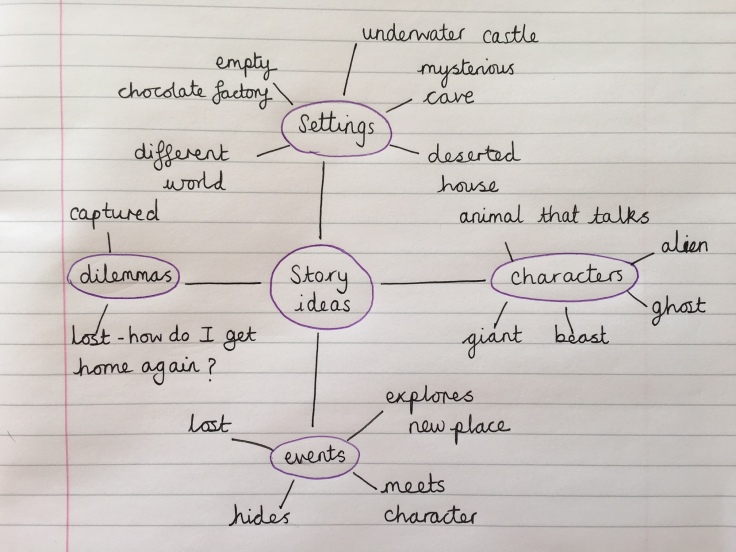 Information and ideas become much more memorable if they are drawn, allowing the child to visualise their new setting or character. It allows time for children to think as they draw, perhaps participating in casual conversations about what their character will be like and generating ideas about what will happen in their story.

“Playful exploration and frequent ongoing conversations about writing can help involve and engage young writers, enabling them to focus on what they might want to say, to whom and for what purpose.”

Here is an example of one way that this could be visualised. Once the inital ideas are drawn on the page, encourage scribbled words or phrases that children have thought about. You could even make a little folded door (like the one pictured) and ask the children to draw their door on the folded flaps, then draw their fantasy world and/or character on the inside.

Children also need opportunities to develop the craft of writing through exposure to a range of quality texts. Opportunities to discuss a range of doorway and portal extracts, to discuss their language, features and forms, to identify particularly effective writing techniques and to imitate these can help young writers understand how to construct and develop their own ideas and writing. Here’s a list of ideas of great texts that include portals or doors, which I gathered with help from teachers on Twitter:

Using text exemplars, modelling writing and demonstrating different features is really valuable, but don’t be tempted to overuse these teaching strategies. Allowing creativity to flow freely and not being too restrictive is crucial. The idea is to ensure that they are in control of their own writing, using their imagination to make up fantasy worlds and inventing their own characters that live there. We want to give them freedom and the power to take their story wherever they want to.

Finally, once plenty of time has been allowed for idea generation, discussion, reading and visualisation, allow sufficient time for children to draft, revise, edit and publish their stories.

If you liked this blog, you may also like…   Literacy Shed’s Prop Shed!