I am a huge advocate of inspiring writing through authentic purpose and audience and one of my fundamental aims this year has been to raise literacy attainment through the use of engaging, creative literacy projects that do just that.

The National Literacy Trust’s writing enjoyment, behaviours and attitudes report (2017/18) shows that enjoyment of writing is inextricably linked with attainment. Sadly, the report also highlights that, since the new curriculum was introduced, there has been a year-on-year decline in the number of  8-11 year olds who write in their free time, as well as those who write for enjoyment.

There is an intrinsic link between attitudes towards writing/enjoyment of writing and literacy attainment and, in order to change attitudes, we need to change our writing culture; we need to be a community of writers. So, when I discovered what Dom, Tim and Simon were up to at Lit Film Fest, I leapt at the chance to work with them and to further develop our a community of engaged, enthusiastic writers. We began preparing to bring the whole of Key Stage 2 together from both of our primary schools (13 classes across two sites) to host our very own Film Festival at our local cinema, Greenwich Picturehouse.

What is Lit Film Fest?

Lit Film Fest have been making waves in the education industry with their exciting work and they have already won a plethora of awards, including: the Institute of Education’s EDUCATE award for improving KS2 English by 3.75 times the UK national average rate of progress, the Teach Primary Award for their Pupil Parliament Project and the COBIS award for LitFilmFest Luxembourg. Download the research outlining how and why this type of cinematic celebration of pupils’ writing has become such a major success.

How does Lit Film Fest work?

In a nutshell, it’s 3 simple steps:

1. Set up a Lit Film Fest teacher account, choose your filming project and download the resources, plans and supporting materials (and set a date for your Film Festival).

2. Follow the teaching sequences with your class (usually 1 or 2 week units) and record their final performances using iPads – Adobe Spark Video or iMovie apps are great for this. Top tip: When using iPads, be sure to encourage the children to film all shots in landscape format and make sure they aren’t too far away from the iPad – or covering the microphone with fingers – as this can affect the sound quality.

3. Celebrate children’s writing by showcasing all of the movies at the cinema (you will need to hire a private cinema screening room) or host your own film festival at school using a projector in the main hall.

Our Experience of hosting a Film Festival

We began by informing all staff that we were participating in the Lit Film Fest project a term in advance and asked each class to choose their own literacy project (which are all matched to NC objectives). In Year 5, we chose to use the ‘Michael Rosen: Why I Play’ poetry topic, but there is a huge variety to choose from (many of these are FREE and you can see the full range here). Thankfully, each of the year groups chose something completely different, which worked really well during the resulting film festival. We had a mixture of ‘Why I Play’ poetry, instructional healthy ‘Lioness lunch’ recipes and non-chron reports about single-use plastic. Due to the broad variety of video styles and themes, the audience was kept entertained throughout our hour-long film festival.

We then downloaded the various Lit Film Fest projects and used the planning, powerpoints and resources to get the writing started. By making children aware of the end goal at the beginning of the project, we witnessed increased motivation and effort in literacy lessons. They knew their final piece would be shown on the Big Screen, in front of hundreds of other pupils, parents and teachers, and this was enough to create that intrinsic motivation to produce something extra-special.

The planning and resources were excellent and our unit of work included videos with Michael Rosen and the Lit Film Fest team. The children found the videos hilarious and the theme ‘Why I play?’ was just brilliant. The whole scheme of work encouraged lots of ‘ideation’ (idea generation) by exploring play in detail and allowing opportunities for talk – before any actual writing took place. We had groups of children dressing up and playing imaginatively, dancing, playing jenga, table football and even air hockey during a ‘carousel-style’ literacy lesson at the beginning of the project. This allowed plenty of reflection on play before we started writing (what it sounded like, what it felt like, different emotions, connections, memories of play etc.). We then discussed it, recording key words and ideas and generally playing around with language. It was a fun and engaging unit that followed the writing process from initial idea generation, to drafting, revising and editing, to reading aloud and performing for a real audience.

Lit Film Fest also offered opportunities to explore a variety of poems (and related performances via Youtube) themed around physical and imaginative play, to interrogate the author’s choice of language and to identify key features of performance poetry, before collaboratively writing some of our own.

Through the Film Festival project, pupils were empowered to choose what to write about and motivated to write for a real purpose. By combining digital literacy with traditional writing, children were more engaged (particularly the boys). They were given the opportunity to be creative, generate ideas, scripts, cinematic direction, performances and, ultimately, professional looking films for the festival itself.

Excitement and anticipation around our KS2 Lit Film Festival grew as posters appeared around the school in the days leading up to it. We decided to also give children the opportunity to wear their very best ‘red carpet attire’ for the premiere of their films and this really added to the atmosphere and made it an occasion to remember. The children did not disappoint! 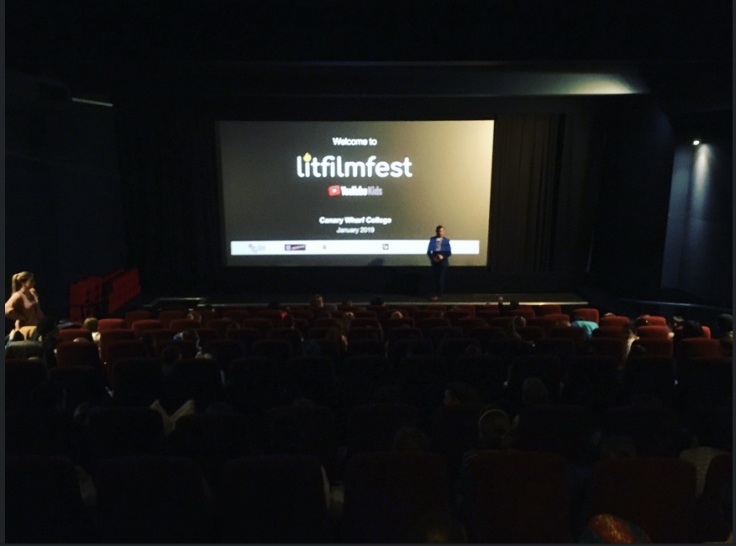 The Lit Film Fest team did an amazing job of hosting the festival screenings and their charismatic stage presence added a special quality to the event. As soon as we entered the screening room, many of the children recognised them from the videos they had seen throughout the project and were excited to meet them in person. Some even requested autographs!

They absolutely loved sharing their films and seeing what other children had been up to. They were the perfect audience – laughing, applauding and reacting at all the right moments. It was a real pleasure to see all their hard work brought to life and celebrated in this way. By sharing this unique cinematic experience, it pulled our writing community closer together. It was a truly amazing event and one that will stay with the children for a very long time.

You can see all of our final KS2 Lit Film Fest videos here.

IMPACT: What did the children say? 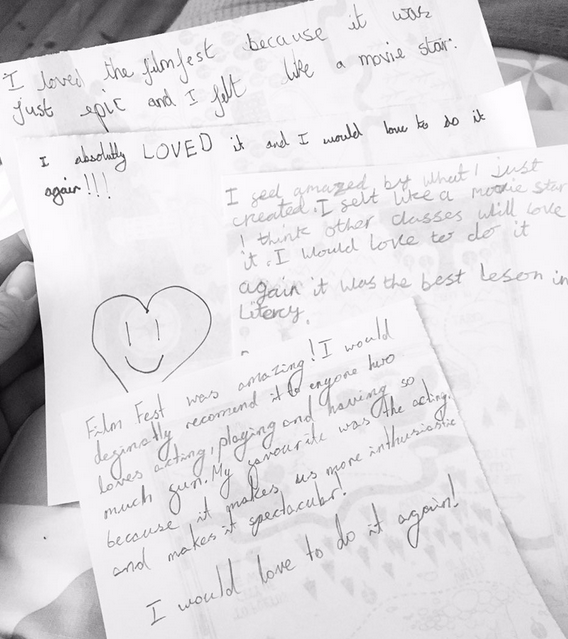 IMPACT: What did the teachers say?

“The children were very engaged from the get-go as the Film Fest gave them an authentic purpose and audience for their writing. It was great to see them working collaboratively as a whole class to create the poem. The festival itself was amazing. It was such an inspirational celebration of their learning and the film fest team were fantastic hosts. The children felt like movie stars!”

“Lit Film Fest completely transformed the way we teach poetry. Everybody was so enthusiastic because of the excitement around the finished piece! Getting the opportunity to rehearse and perform their poems taught the children about rhythm and tone and took their poems to a new level. The children were overjoyed to see their videos on the big screen and the experience has definitely enhanced their love of poetry!”

“Year 4 were very excited to be part of the ‘Why I Play’ Film Fest Project. They loved the lessons and they were very inspired by Michael Rosen’s performances. Knowing that their work would be filmed and shown at the cinema motivated them to work even harder and use their skills to the maximum to produce amazing poems. Having to rehearse and perform their poems was really inspiring and they enjoyed the writing part as much as the performing part. They were really looking forward to see the outcome of their hard work.”

“My class really loved our Literacy Film Festival project. They were engaged and excited throughout the whole process. It was such a wonderful opportunity for them to gain confidence when performing in front of their peers.”

“The Lit Film Fest has brightened up our two week Literacy unit. The year 3 theme, Pupil Parliament, has been exceptionally stimulating for our pupils in terms of spoken language development, Computing Literacy and team work. Children have shown an incredible talent while realising a videoclip in the Newsround format, discussing sensitive issues like ‘reducing the use of plastic’ within our school community.”

“The children were extremely engaged and enthusiastic throughout the Poetry Project. Premiering their performance in Greenwich Picture House allowed them to really immerse themselves in the project and create some outstanding work. In addition to this, we were able to see children really come out of their shell and take ownership of their work and their performance.”

IMPACT: What did the parents say?

“Thank you for the opportunity to attend the Lit Film Fest this morning. It was wonderful to see the children dress up and feel excited about watching their film on the big screen after all their hard work!  It’s a great way to engage and encourage them in any future projects. It was truly impressive. Well done to all who took part, as well as the teachers who materialised this brilliant idea. What a fantastic way for children to learn from each other!”

“What a pleasure it has been to accompany the children on this special trip. I think LitFilmFest is a great event that enables kids to experience many different things and practice a palette of skill sets, including working together, developing and writing a script, learning to be in front of cameras, learning to deliver messages to audiences, self expression and confidence, etc. All of which are essential skills that prepare them for their adult life and working environment, while having a lot of fun and creating memories when doing it. All in all, a very special experience for all of them.”

“Thanks you for organising such an interesting event. It was amazing to see our children on the big screen and to discover the fantastic short movies they have created. I know all children have really enjoyed working on the movies and have learned so much through this experience.”

I have to say that the Lit Film Fest team were excellent throughout the whole project. They were there to support our questions and queries every step of the way, they even helped us book the private cinema screening room and converted all of the children’s Adobe Sparks movies into a suitable format for the cinema. Here is a snapshot of them preparing the films at the cinema on the day: In addition, one class from each of our two school sites won a YouTube Kids filming day to re-film their movie with professional video recording equipment and videographers! The winners were announced at the festival and filming took place shortly afterwards. This was also an amazing experience for the children and an added bonus!